“Haley’s monumental achievement helped convince the nation that the black story is the American story. He also made it clear that black humanity is a shining beacon that miraculously endured slavery’s brutal horrors.” – Introduction to Roots from Michael Dyson

Where do I start in attempting to convey how this book consumed my mental space and even after finishing, I can’t stop thinking about the ramifications of what was related in this book. Slavery in the United States is a part of American history, so I can appreciate why Haley titles the book, Roots: The Saga of an American Family.

As one of the books on my list of books I should have read by now, the month of February seemed like a good time to read Roots, a fictional depiction of the author’s family history tracing back to his Gambian ancestor, Kunta Kinte. Since I’ve never seen the mini-series I didn’t really know much outside of a young man named Kunta Kinte was stolen from his village in Africa and enslaved on a plantation in Virginia.

The book begins in 1750 with the birth of Omoro and Binta Kinte’s first son, Kunta, named after his honored grandfather who is thought to have saved the village of Juffure from a famine. From the very beginning, we are impressed with the importance of names and identify in the book. We also get a strong sense of the pride and importance of the Mandinka people and their traditions while young Kunta grows up. Griots, or story tellers, are another important aspect of Mandinka tradition, since griots are likened to living historians. History and family lineages are preserved and passed down from one griot to the next.

Kunta learns much from the people in his life; his father, friend Toumani, and his surrogate grandmother, Nyo Boto, all of who feed his mind with things to ponder about life and living as a proud Mandinka man. I appreciate how Kunta was taught from a young age to respect his elders, to avoid arguments and confrontations, and to have a strong sense of self-respect coupled with a desire to be a responsible young man. Sometimes the essential elements of child rearing are lacking in our world of advancement and technology. I often tell my nieces and nephews how important it is to learn the basics, which includes cultivating some of the same qualities Kunta learned all those years ago as a young man.

Especially heartwarming is the sense of responsibility he feels towards teaching his younger brother Lamin. What Kunta doesn’t know, he asks his father and as they grow, Omoro teaches both of his sons about the dangers of slave catchers and the toubob (white people).

“The things I’m going to tell you now, you must hear with more than your ears—for not to do what I say can mean your being stolen away forever!“

I tried to imagine what that must feel like as a parent to teach your young children these hard lessons and even in understanding them, the consequences of what happens if it does happen. Can you imagine learning this lesson as a child, that there exist a real and ever present danger of being stolen and enslaved? Not to mention the fact that some black slatee traitors live among them so one most always be careful.

“Never be alone when you can help it. And day or night, when you’re alone, keep away from any high weeds or bush if you can avoid it.”

“Many of our own people work for him. They are slatee traitors. But without knowing them, there is no way to recognize them. In the bush, therefore, trust no one you don’t know.”

Before long Kunta goes away for his manhood training, where he learns lessons in taking orders, unity, survival, and hunting. Kunta muses on how small he is in relation to creation, his country, and his Creator, Allah. When he returns home, he confronts the changes in himself and how these changes will impact his relationship with his love ones.

As Kunta observes the Council sessions held by the elders to deal with issues and disputes among the people of the village, the hearing dealing with young Jankeh Jallon, a young woman who was stolen by the slave traders but managed to escape. The whole village rejoiced at her return but after she gives birth to a tan baby, she’s treated as a social outcast. The heating and the uncertainty of a pending decision from the elders makes an indelible impression on Kunta.

Life as Kunta knows it continues and before I know it, I let my guard down and settle into the routine of life, as Kunta has. Then it happens. Kunta is stolen and captured, chained and shackled like an animal, imprisoned on a ship, surviving some of the most detestable and devastating conditions. Months of travel at sea in the cargo part of a ship to, over 4,000 miles, among others taken against their will, soiled by human waste, wails and sickness. I was physically and emotionally sick and had to stop reading. This was probably one of the most difficult parts of the book to read. A lot of things happened on this journey and I couldn’t help but think about how long this happens and to how many people. According to the history.com, “Slavery in America by began around 1619. Historians estimate 6 to 7 million black people were imported during the 18th century alone.” My God can you imagine but more importantly, can you import a human; stolen seems more of an accurate description. So Kunta’s experience mutilpled millions of times over, families torn apart and changed forever because of the slave trade.

This book made me think about many things; the brutality and inhumane behaviors and attitudes involving the institution of slavery. Slavery destroys and robs a person of so much–freedom, identity, family, heritage, self-worth, knowing where you come from–being able to decide what you want to do and when you want to do it. To go from living a life of your choosing to one of survival, where you no longer recognize the person you once were because your heritage is seen as threat, is startling and tragic in many respects. To be purposely kept in ignorance and live in fear of what “massa” might do, selling you off and separating you from those who become surrogate family and friends due to the consequences of slavery.

A good portion of the book follows Kunta’s life, he marries, has a daughter. Some might say Kunta is lucky to have the “massa” he has because life in slavery isn’t as hard as some others. But can a person living as a slave be lucky? Haley draws attention to Kunta’s transition, transformation and gradual understanding about life as a slave. Haley’s depiction of Kunta’s many escapes are definitely hopefully in a sense, but we know enough and as Kunta soon learns, he’s not the first to run and probably not the last. Kunta also learns how and why other slaves look at the institution of slavery differently than he does. The Fiddler “educates” Kunta and he continues to try to reconcile this difference in perspective.

“And the main thing he wanted him to understand was why he refused to surrender his name or his heritage, and why he would rather die a free man on the run than live out his life as a slave. He didn’t have the words to tell it as he wished, but he knew the brown one understood, for he frowned and shook his head.” (328/329).

When the book transitions to the other generations of Kunta’s family, I couldn’t help but think, what happened to him and Bell? I’m sure Kunta’s daughter Kizzy thought of them often, but in doing this, Haley impresses upon the reader the sad reality of the ripple effect slavery had on countless people and their families. The majority of the book follows Kunta’s life and his grandson, Chicken George. As the book approaches it’s conclusion, I didn’t feel like I got a real sense of the generations leading up to the narrative of author, Alex Haley. It would have been nice to get an understanding of what happened with the generations after George since slaves do receive freedom before the book ends.

Not to be overlooked is the controversy about plagiarism and the authenticity of Haley’s research. In the e-book I borrowed from my library there were various interviews with Haley that offered much insight into his research and desire to write this book. In the author biography of the book, it briefly discusses the lawsuit in 1978, when Harold Courlander, author of The African, sued claiming that passages contained in Roots were copied from The African. Haley settled out of court for $650,000 and admitted that it was unintentionally, claiming the researchers who helped him didn’t site the source.

In watching the interviews I also discovered that when first published, Roots was considered non-fiction, but Haley called it faction. He clarifies in this statement:

“To the best of my knowledge and of my effort, every lineage statement within Roots is from either my African or American families’ carefully preserved oral history, much of which I have been able conventionally to corroborate with documents.”

“Since I wasn’t around when most of the story occurred, by far most of the dialogue and most of the incidents are of necessity a novelized amalgam of what I know took place together with what my researching let me to plausibly feel took place.”

I’ll admit I was a but shocked to discover this about a book, winner of The Pulitzer Prize, but also because as a journalist, it seems Haley’s profession would require him to check his facts and cite his sources. But when you consider how research was conducted without the conveniences of the internet, Google, video conferencing or social media, I’ll say that’s an impressive feat.

From some of the interviews I watched, I could understand Haley’s intense and consuming desire to trace his families origins all the way back to a slave ship. For black people, who’s ancestors were enslaved, at that time, tracing your family lineage seems impossible. Because of the oral history careful passed down from one generation to another, Haley inspired millions of people to find out more. Written history leaves out the nuances or the essence of a person, especially during a time when black people were not valued as people. Roots inspires you to know where you come from, who came before you, and how they survived some very difficult times.

“Haley’s monumental achievement helped convince the nation that the black story is the American story. He also made it clear that black humanity is a shining beacon that miraculously endured slavery’s brutal horrors.” – Introduction to Roots from Michael Dyson 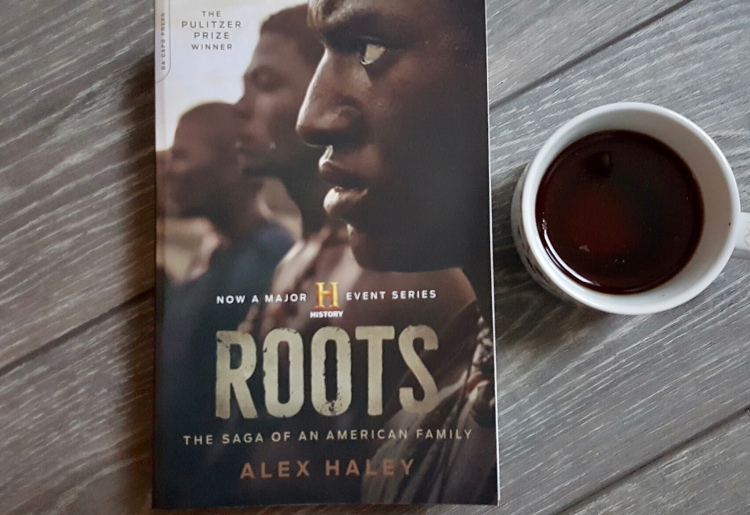 Have you read this book or watched the mini-series? If you have what affect did the story have on you?