In Ch 61-80, Kunta gets married, has a daughter and names her the same way his father named him over 40 years ago. Kunta learns still more about life as a slave and Bell asks him something he hadn’t thought about in years, about running away. We examine relationships and also watch the Fiddler’s heart break as he attempts to buy his freedom. Sadly, a slave can only dream of freedom, even with a non-violent master like Massa Walla, who can’t be trusted to keep his word. Melanie and I discuss this and more below. 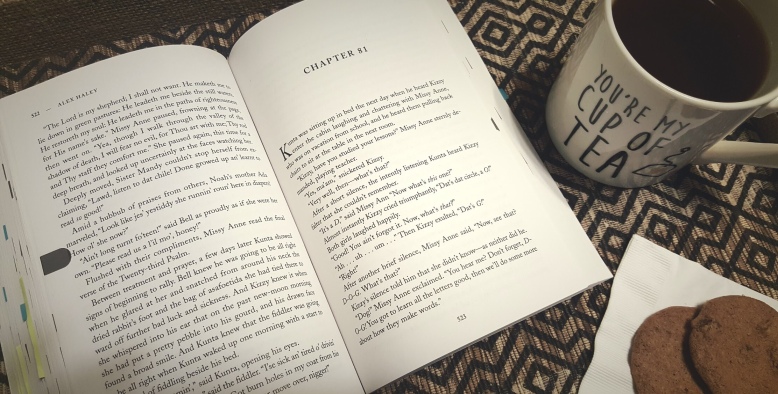 Shell: Kunta’s meeting and discussion with the Ghanaian made me happy for both men, especially since they were not born into slavery, so for both of them to be able to discuss where they’re from and what they’ve experienced was a turning point for Kunta.  The advice from the Ghanaian, “What you needs most to live here is patience—wid a hard shell” (389), leaves Kunta with a lot to think about.  This seems like the encouragement he needed to work through his feelings and think about his future, getting married.

Melanie: I was disappointed that Kunta didn’t visit the Ghanian man again — or, if he did, we don’t get to read about it in detail. As a result, I let him go to the back of my mind and focused on other aspects of the story more. However, what stood out to me was the sheer joy a person can feel when they find someone who has a similar background as they do. I moved 200 miles away from my hometown, which had both a state school with over 25,000 students and a Native American reservation, to a highly conservative city that worships at the altar of Notre Dame football and Catholicism. You can get in trouble if you don’t pretend to be Catholic if you work at Notre Dame (the largest employer in the city) or any of the neighboring schools. Finding someone like me is hard here, and when I do find those people (every few years), I cling to them like life rafts.

Shell: Being different and valuing who we are, what makes us unique, is part of being a whole person. That’s one of the things I spent a lot of time thinking about while reading this book. I’ve been sick this week, so I finished it but won’t jump ahead in the discussion. From everyone else’s perspective Kunta was African, but he was still black so there was the expectation he should just forget who he was.  But he was determined to hold on to as much of who he was as he could. In some ways I think there was some frustration on both sides of the table, Kunta in not having someone who understands him and what he’s clinging to regarding his heritage. Then those like Bell born in slavery get frustrated when Kunta gets started on his African stuff.  When it comes to naming their daughter, Kunta didn’t budge on sticking with his tradition. Bell’s feelings in causing trouble and getting the massa upset are valid, but so are Kunta’s.

Melanie: Yeah, the misunderstanding stems from living vs. surviving. To Kunta, his name and where he comes from is part of what makes him a man, a living man. To Bell, keeping yourself out of the field and away from the whip and auction block keeps you alive. Since she was born to slavery, all she knows is survival. She reads and wants freedom, and the fiddler saves up that $700 to buy his freedom, which suggests they aren’t as content as I thought in chapters 41-60. That was my concern: contentment with the barest minimum is a sort of death itself. I also mentioned in our previous conversation that I hoped Bell and Kunta would get married, but then when they did, I was surprised! I learned that she was 42 or 43 when Kizzy was born, which even by today’s standards is considered a “geriatric pregnancy,” so I was scared she wouldn’t survive the birth.

But let me step back. The way Bell was so stubborn angered me at times, which is silly because I’m a feminist and think she should have her own opinions. I guess there is a place in my heart that hopes Kunta can live the kind of live he would have had in Juffure in Virginia with Bell. I want so much for him to “go home,” so to speak, that I dismissed Bell in my heart for a while. The wedding scared me, and I felt that the way Alex Haley wrote that scene (pages 348-349 in my book) really put me in Kunta’s shoes. Everything was Christian, holy roller Christian, and Kunta was scared, his religion ignored, the very decision to marry Bell a big question mark. I wanted to run away! But then, the longer they were married and she revealed reasons the master would sell them off, the more I felt like anything to keep the Kunta family together was necessary. Can we talk more about Christianity in the novel?

Shell: I appreciate Kunta’s approach to everything; he’s thinks matters through and when he contemplates marrying Bell, their belief systems are very different.  He learns to survive but he still have dignity and integrity, which I admire in the reality of his life as a slave. I wouldn’t call Bell and the other slaves holy roller Christian, it’s more Southern Baptist feel to me but I digress.  I thought Bell was stubborn at times, but I also thought about my grandmother and great-grandmother. Women in this time period endure a lot too, so I thought more about what Bell most have experienced and how she shared with Kunta, maybe even a little reluctantly, her past, which shaped her into the woman she was.  I still loved her and could admire her good qualities like Kunta did, too. I enjoyed their shy courtship, the gifts he made for her, and the gift she made for him. Bell was forced to confront the possibility of finding companionship, love, and some happiness, which even got her to open up to Kunta about running. He learns something else about her: I don’t think he had ever considered that she or any of the other slaves had thought of that at all.  He realized he had gotten too old and that they wouldn’t make it.

Let’s save the part about the fiddler for last.  I wanted to delve into that a bit more.

Melanie: It’s true that I don’t know my different types of Christianity very well. I chose the phrase “holy roller Christian” not in a disrespectful way, but referencing the fact that they literally rolled on the ground the day they had the picnic and baptized Kizzy. As much as I love Kizzy, everything about her scares me: playing with little Missy Anne, learning African words (because she could get caught saying them), being baptized and integrated further into a society that is opposite of Mandinka life. I do have hope that Kunta will teach her how to write in Arabic and learn the Koran, but that’s another potential reason for Kizzy to be sold. I’m sadly predicting that she’ll be given to Missy Anne. I’m sad that being a friend/companion to a white girl might be Kizzy’s safest bet.

Shell: Not at all, I didn’t take your comment that way, but I understand what you meant.  I tried to put myself in Kunta’s shoes, and when he saw how the others were baptized, I couldn’t blame him one bit for running to save his baby.  As Kizzy grows up I could see how there was something to what both of her parents tried to teach her about her relationship with Missy Anne, but it’s hard to teach them the difference until feelings are hurt.

“Kizzy was too young to understand such things, but Bell knew all too well what wrenching anguish could result from trusting toubob” (468).

You know, I thought about The Bluest Eye in the scene with the doll Missy Anne gave Kizzy. I also thought about another book I read recently, The Autobiography of an Ex-Coloured Man. There are classes of people even within races, and Haley depicts them throughout the book.  Called colorism today, I think about how this form of discrimination and separation within one’s own race stems back to slavery.

“But Kunta could see, after a few minutes, that Kizzy liked the toubob doll better, and for the first time in his life, he was furious with his daughter” (465).

Melanie: Ah, that’s a great quote! I didn’t even connect to The Bluest Eye, a book I’ve also read, likely because I read it so long ago. I did think of a musical called The Bubbly Black Girl Sheds Her Chameleon Skin in which the main character, a black girl, idolizes her white doll and is surprised to learn that the doll is wearing a blond wig and has an afro underneath (the doll is like a tiny human for some reason). There is so much tension in every relationship on this plantation, and I’m interested by how much Haley’s writing is affecting my emotions. I mentioned the push and pull between Bell and Kunta (more like growing pains) and the secret relationship Kunta develops with Kizzy, but there is also how do Kizzy and Missy Anne actually feel about each other, how do Kunta and fiddler and gardner feel about each other, etc. There’s a whole chapter after Kunta meets the Ghanian that he avoids the slaves on his plantation because he sees them as different once again, and because he avoids them, they snub him. These friendships must constantly grow and be repaired.

Shell: Haley gives us the space in this book to consider the complexity of these relationships.  I suppose since the book is so long and covers over 200 years, there’s a lot to chew on. I hoped Missy Anne would get to have Kizzy as her maid when she comes of age, that would be something, but I suppose that’s a different conversation. It reminds me of another couple books I read, The Invention of Wings and The Wedding Gift, in which white girls were given slaves at a certain age.

Kunta’s relationship with all of them changes and develops over the years, and they have become family from different places.  Something Kunta says made me think about how he knows where he comes from, but so many of the others do not. Take for example Kunta’s reaction when he learns the garder’s name after he has died.

“He wondered if the gardener himself had known. More likely he had died as he had lived—without ever learning who he really was” (459).

I don’t think Kunta, or we as the readers,  realized that the Fiddler was holding onto the hope of freedom.  I think it was probably very important as a slave to put on airs, so to speak, to build a wall around his heart and what’s in there because slaves didn’t know who they could trust and they also never knew if and when they would be separated from those they had grown to love, those who had become family.  I felt so crushed when the fiddler told Kunta he could have some mattress stuffing (money he’d saved to buy his freedom, but was denied). He had worked so long toward a dream that went up in smoke because he was worth more than when the master told him after the price of slaves went up post-rebellion. I think it shocked Kunta to know this about the fiddler, but also that trusting a master to do right by him wasn’t realistic.